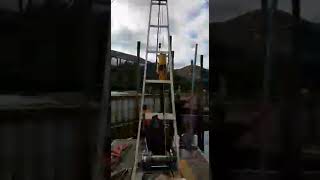 We've named several of our tools and I think Tombstone would be an appropriate nickname for this one (if you don't get it, just give a fake chuckle and carry on). Weighing nearly 1,000 pounds our pile driver is hoisted into the air with our A-frame & wench. It's draped over the piling and uses air compression to rise several inches before pressure is released causing the hammer to fall and drive the piling. This process is repeated until the piling stops sinking and then we d

Andrew and team have been up in Isle of Palms for about a week setting piling for two customers that are neighbors. In all it's about 40 piling and will take about two weeks to complete.